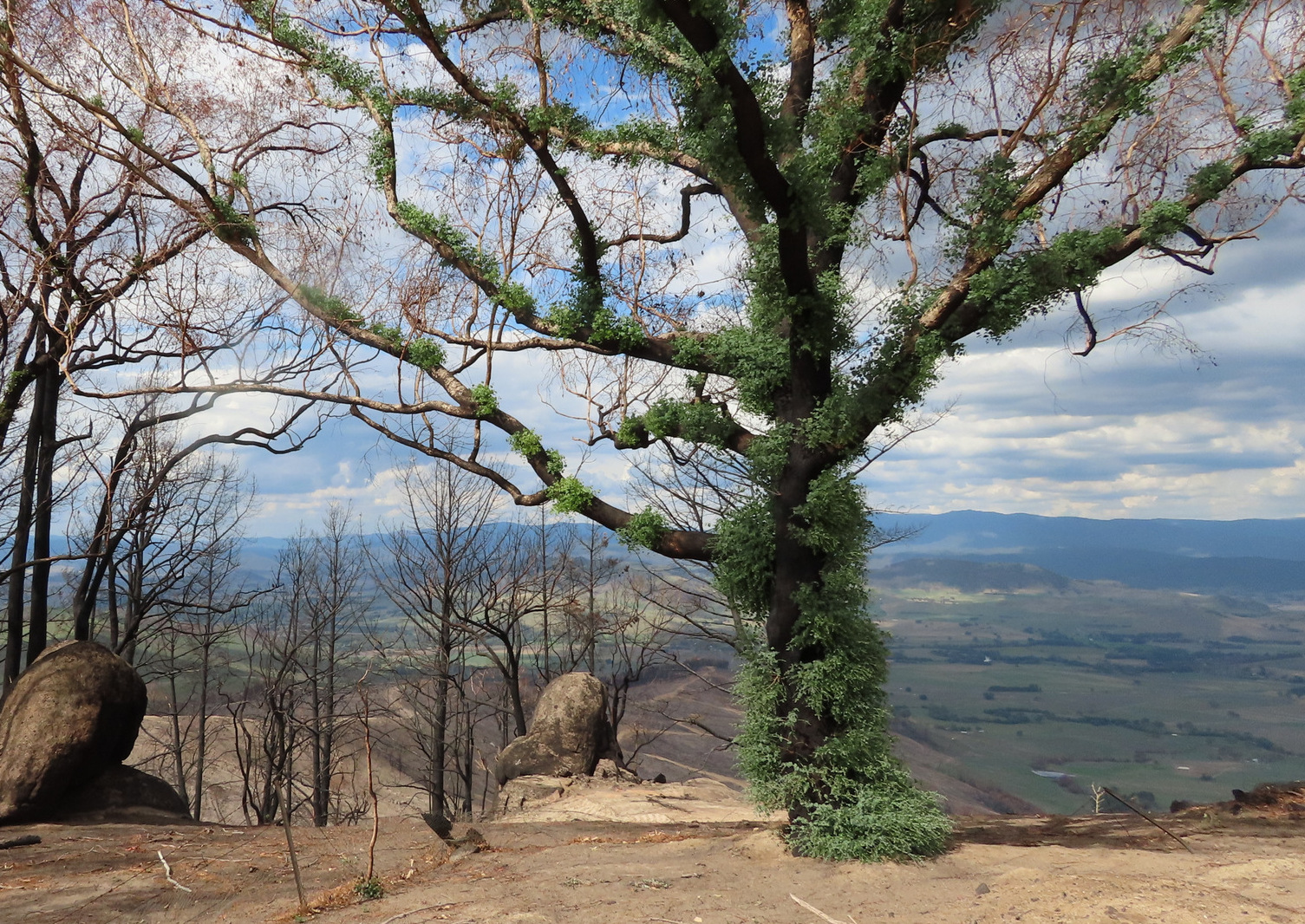 The view from the centre of town of the hills to the north was one of almost total devastation. The tree cover had been completely burnt. At the base of the hills the pasture was already green again and supporting herds of cattle. Here and there were trees and bushes, some now charred remnants while others remained untouched. A plume of grey smoke arose from a heap of charred timber, indicating that in places the ground was still hot.

In the ravaged bushland, a number of bird species were managing to survive. Various parrots were present, their coloured plumage contrasting vividly with their surroundings, but other forms of wildlife were not in evidence. Sheltered in a ditch by the roadside grew a patch of bluebells, their delicate flowers waving in the breeze.

My objective to record examples of regrowth following the fires over the December to January 2019-2020 period was limited, as the major areas of bushland were still closed. I reached the entrance to the Mt Mittamatite Regional Park and Flora Reserve to find further vehicle access barred, and had to be content with examining the area just inside the gate and at the side of the road.

At the top of the steep slope a magnificent Eucalypt adorned the crown of the mountain, visible from all directions, like a monument to the magnificence of the Australian bush. Now it was a blackened skeleton, a shadow of its former glory, stripped of its canopy. Yet already it was putting out numerous sprouts of fresh foliage in unusual places along its trunk and branches. I photographed it against its backdrop of the Kosciusko Ranges on the far horizon, standing in bare earth amongst fallen timber, the only survivor of a once thriving and diverse habitat.

Next day, I drove to the Burrowa-Pine Mountain National Park farther north, which had been in the path of the inferno that had swept across the Murray from New South Wales to reach the outskirts of Corryong. The park was also closed, with signs posted warning of risks and dangers. My activities were therefore again restricted to taking photographs along the side of the road. Everywhere the bush was initiating strategies for recovery. Bright green and blue-green epicormic growths were erupting all along the trunks and branches of the eucalypts and a variety of understorey species were emerging from the scorched ground.

I continued travelling northward and for two hours drove through an entirely altered landscape. Whole pine plantations had also been destroyed and heavy equipment was working to salvage the blackened trunks leaving vast, cleared areas. There was a constant stream of logging trucks following the Murray Valley Highway.

The magnitude of the calamity was difficult to comprehend. I was conscious of a deep sense of loss and an awareness that this special place will never be the same in my lifetime. I returned to unaffected areas and began the long journey home.

Some of the many photographs I took have been contributed to the Environmental Recovery Research Project on the iNaturalist online database.

Since lockdown I have not yet been able to return to continue my investigations.

The Cranbourne Friends Annual Report for 2021 has now been…

The Royal Botanic Gardens Victoria is open for visits. See:…

New volunteer positions! Can you help?

Join us for a fascinating tour of the world of fun

A beautiful view looking towards the Weird and Won

The Red Sand Garden - possibly one of the most pho

Reposted @royalbotanicgardensvic If you would lik

Stay still long enough and nature will come to you

Banksia petiolaris is an eye-catching groundcover

The Tiny Thomasia (Thomasia pygmaea) in the Divers

This is very exciting news for those who are lover

Spring is in the air and Imperial Jezebel Butterfl

Today is National Wattle Day! Have you noticed lo

Just because it's winter, doesn't mean there isn't

Did you know the Common Heath (Epacris impressa) i

This interesting plant, which has started flowerin